There’s this really intriguing woman. She was married for just a day. She married her husband and long-time partner on April 29, 1945. They actually got married at midnight of April 28 breaking 29 of that year.

She was born in 1912. Though she’d been with her partner for over a decade, the latter had refused to marry her. He believed this would come between his political career. She wasn’t specifically accomplished or known as a woman of great talents. Her partner never allowed her to be seen in public with him. Many of his people didn’t even now she existed. But, if there was one thing he admired about her, it was her loyalty towards him.

Perhaps that loyalty pushed him to finally marry her, and that same loyalty, for her to follow him into the grave.

On April 30, 1945, her husband bid goodbye to his friends or maybe fiends, walked into his bunker and put a bullet to his head. She too, out of loyalty, I guess, took in poison, probably a cyanide capsule. She was aged just 33. Even death could not hold her loyalty back. The couple was burned, according to the man’s testament.

Her name was Eva Braun. Her husband’s name was Adolf Hitler!

RESIGNATION FROM THE CPDM

I have the honour to inform Your Excellency that after careful consideration and careful thought, I have decided to address to you my resignation from the Cameroon People’s Democratic Movement (CPDM) and my reasons for resigning are as follows:

The CPDM which elected me as its first National Vice President is the party which forms the GOC and has been responsible for shaping government policies.

As the National Vice President of the party, I have found it impossible to use my exalted position to help in any way shape or influence the policies of the party and nation because:

1) Demands by me for audience with the Chairman (President) of the party to discuss issues have been systematically turned down.

2) Several memos and representations I have made in writing on several important national issues have been ignored.

During my political career which spans over forty years, I headed the group that campaigned for and got the peoples of the then Southern Cameroons to vote for unification, after which I went from village to village in the then East Cameroun at the risk of my life to calm terrorism which existed at the time. I even housed some Cameroonians wanted in East Cameroon. I successfully had them reconcile with the Ahidjo government. I missed being shot down on my way from Bafang on peace making mission.

After unification, a lot of Cameroonians had confidence in me and when the first Presidential elections were coming up, many people urged me to stand against President Ahidjo. I decided to go for the Vice Presidency instead in order to avoid unnecessary conflict and further bloodshed.

When President Ahidjo decided to get rid of me as the Vice President, a lot of Cameroonians sympathized with me and urged me to make an issue out of it, but for the love of peace, I came back quietly to live in my village as a private citizen.

After settling in my village, I was occasionally consulted on some national issues and I accepted to serve the people of Cameroun in whatever capacity it pleased the powers that be to put me. When the leadership of Cameroun changed hands and Your Excellency became the President of the Republic and eventually head of the CNU, I assured Your Excellency that I was at your disposal and ready from my experience to give you advice you may need on national issues.

1) Unfortunately this was not to be as it became clear to me that I had become an irrelevant nuisance that had to be ignored and ridiculed.

– I was to be used now only as window dressing and not listened to. I am most of the time summoned to meetings by radio without any courtesy of my consultation on the agenda.

2) All projects of the former West Cameroon I had either initiated or held very dear to my heart had to be taken over, mismanaged and ruined, e.g. Cameroon Bank, West Cameroon Marketing Board, WADA in Wum, West Cameroon Cooperative Movement.

3) Whereas I spent all my life fighting to have a deep sea port in Limbe(Victoria) developed, this project had to be shelved and instead an expensive pipeline is to be built from SONARA in Limbe to Douala in order to pipe the oil to Douala.

4) All the roads in West Cameroon my government had either built, improved or maintained were allowed to deteriorate making Kumba-Mamfe, Mamfe-Bamenda, Bamenda-Wum-Nkambe, Kumbo-Bamenda inaccessible by road. Projects were shelved even after petrol produced enough money for building them and the Limbe sea port.

5) All progress of employment, appointments, etc. meant to promote adequate regional representation in government and its services have been revised or changed at the expense of those who stood for TRUTH and justice. They are identified as “Foncha man” and put aside.

6) The Anglophone Cameroonian whom I brought into the Union have been ridiculed and referred to as “les Biafrians”, “les enemies dans la maison”, “les traites’ [traitres], etc., and the constitutional provisions which protected this Anglophone minority have been suppressed, their voices drowned while the rule of the gun has replaced the dialogue which Anglophones cherish very much.

8) Embezzlement of Public funds in all forms and illegal exportation of our currency by the privileged class seems to go without reprimand but is rather condoned.

9) The constitution which I have held and preached as the supreme law of the land is in many respects being ignored or manipulated… Let the CPDM not move towards the direction where it will find itself collapsing faster than many of the “strong” governments that have collapsed in recent memory. My resignation is effective from today the 9th June 1990.

I have the Honor to be

John Ngu Foncha: Short biography and important links with the history of Cameroon

1942 – 1957: Union activist with the Union of the Catholic professors of Bamenda and the president of the Bamenda section of the Nigerian Union of Teachers;

1955: Leaves the Kameroun National Congress due to disagreement on the issue of reunification and founds the Kamerun National Democratic Party (KNDP) with Augustine Ngom Jua;

1957: The KNDP gets 5 of the 13 seats of the Southern Cameroon House of Assembly

11 February 1961: referendum on the future of British Cameroon. Foncha takes sides for reunification with Cameroon;

October 1, 1961: Southern Cameroon is reunited; Foncha becomes Prime Minister of the Federated State of West Cameroon and Vice-President of Cameroon;

May 13, 1965: Foncha leaves the primacy, succeeded by Augustine Ngom Jua;

1966: End of the multiparty system. The KNDP becomes part of the CNU, President Ahmadou Ahidjo’s party;

In the years 1970-1980: Ngu Foncha approaches the secessionist movements that advocate an independent state of Ambazonia;

1990: Foncha leaves the CPDM, the presidential party (ex-CNU), because of the discrimination against Anglophones that this party would show;

1994: led the Southern Cameroon national council delegation to the UN to demand more autonomy for the English-speaking provinces;

Once upon a time there existed breast rippers. They were simply forks used to rip breasts away. Cruel and gruesome! Unimaginable, yet verisimilar! History records its use in the late 1590s in Bavaria, Central Europe; and in other parts of Germany and France until the 19th century.

In use, the forks were attached to a breast at a time; then ripped off. It pulled off chunks of flesh from the fleshy breast, which either left the subject definitely mutilated or dead; both ways passing through inexpressible pain.

A variant of the breast rippers was the Spider: even more horrendous. The Spider would be affixed to a wall, and the subject’s breast snug into it, then the subject pulled out, leaving chunks of breast particles ripped by the Spider on the wall. Horrible! Appalling!

Abortion, self-abortion, adultery, self-miscarriage, were mainly what drew out the breast rippers or the Spider; either as punishment or for interrogation. Later set in blasphemy and witchcraft.

Right until the 19th century in some parts of Germany and France, this was being used. A simple deduction: the people didn’t encourage any of the following – abortion, self-abortion, adultery, self-miscarriage and all the others. To them, such warranted and deserved the heartrending punishment, albeit appalling, disgraceful and degrading.

The question is: What’s being said today?

It’s shocking to see how values once upheld have quickly sunk to a state lower than man could ever imagine. It’s unbelievable that persons who once detested an act, and who were ready to perpetrate horrendous practices on fellow human beings can so easily sit back and let the same murky rivers flow into their homes and lands.

Yes, the laws are there to regulate, and do their utmost best to, reason why we hear “pro-life” and “pro-choice” everywhere one can today; and “pro-trash” (my opinion). Reason why adultery or extra-marital affairs do not warrant much eyeing. After all, isn’t it supposed to be one’s private life and/or personal choice?

Indeed it is, and ever will be. It always has been, except that as the breast ripper ripped in the past, it is ripping now; or reaping, if you will. Not necessarily the breasts (I would never support that, for no reason on earth), but the hearts; the humans in us.

She wobbled, more than walked!

Her feet were at least 17 inches long; her name was Fannie Mills. The petite woman weighed 52.27kg and wore size 30 shoes of the epoch, made from three goat skins, and pillowcases used as socks.

“The Ohio Big Foot Girl” was born in Sussex, England either in 1859 or 1860 to English migrants who settled near Sandusky, Ohio.

Fannie had a condition known as Milroy Disease, which caused her feet to grow to an abnormally large size. The family believed her illness resulted from a “maternal impression” when Mr. Mills, her father, made the pregnant Mrs. Mills wash the swelled leg of a horse.

Her career began in 1885, when she entered the museum circuit, accompanied by a nurse, Mary Brown. After the offer of $5000 and a “well-stocked farm” to anyone willing to marry the big-footed girl, she eventually married Mary’s brother, William Brown.

Each foot was said to be 7 inches wide, though photos prove else.

46-year old William wedded 26-year old Fannie in late 1886 and by August 1887 Fannie was delivered of her stillborn child.

Milroy disease is a condition that affects the normal function of the lymphatic system. The lymphatic system produces and transports fluids and immune cells throughout the body. Impaired transport with accumulation of lymph fluid can cause swelling (lymphedema). Individuals with Milroy disease typically have lymphedema in their lower legs and feet at birth or develop it in infancy. 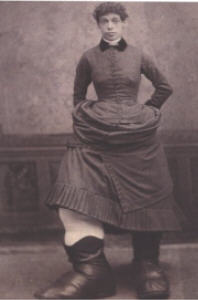 Fannie got out and about with her family and became well-known.

The lymphedema typically occurs on both sides of the body and may worsen over time. Males with Milroy disease are sometimes born with an accumulation of fluid in the scrotum (hydrocele). Males and females may have up-slanting toenails, deep creases in the toes, wart-like growths (papillomas), and prominent leg veins.