Preparations for the long awaited Golden Jubilee of Cameroon’s Reunification have gotten into high gear, as the historic town of Buea gets set to welcome dignitaries from within and without, for the anniversary celebration  of the permanent fusion of former West Cameroon and East Cameroon on October 1, 1961.

But for the Reunification Monument, and the Open Air Amphi to host the cultural manifestations, all shows green light as work is completed by 80%. Work in Buea, which has soaked in over FCFA 30 billion for face-lifting projects; make the place ready for the commemoration’s sparkle, according to South West Governor, Bernard Okalia Bilai.

Speaking after a three-hour regional local planning committee meeting on November 26, he was confident that Buea will host the celebrations billed for this year. Committee meetings have been taking place, to make provision for the expected 30.000 visitors to the town of legendary hospitality: BUEA, where it all started. 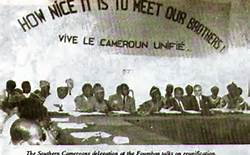 Over in the nation’s capital, Yaounde, it was the turn of elites of the Manyu division of the South West Region, to converge in their cultural hall and systematize their own contributions for the national celebration.

On Friday November 22, 2013, the Minister of Youth Affairs and Civic Education, Bidoung Mkpatt, was in Buea, to assess march past rehearsals for the celebrations as well as chair the second preparatory meeting for the civilian march past.

Even as elites of the host region, as well Cameroonians in general are keyed up about the long-awaited commemoration, the actual date for the fruition of their entire bustle remains unknown.